Collisions at the Corner of Art and Commerce

Wherein The Consultant Fails to Practice What He Preaches 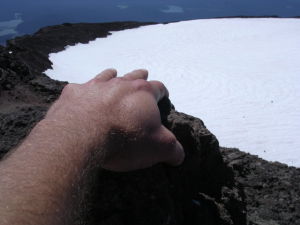 That's my hand at the very top of The South Sister in Central Oregon..

So there are some cobwebs 'round this blog, I know.  But I've got a good excuse.... no really!  I was taking some time away from work for the summer.

I know, I know, "cry me a river", you're saying, but after pretty much going flat out since 1985 in the music business, it was time to step off the hamster wheel for a bit.  Sure, I've had vacations, and my life is rich and full, and reasonably balanced between work and life, but despite all of the preceding, the one thing that I've never really been able to do is step away fully from my work.  When I say I've taken vacations,  those have all basically been 'working vacations'.  With the exception of the occasional backpacking trips in the boonies away from cel service, I'm essentially always in some level of contact with my work, by phone, email or text.  I work on my own by choice, I don't have an office staff, as I prefer the freedom that affords me in other areas, but it obviously makes me need to be accessible at all times - the buck all stops with me.

So this past summer, I hired someone to fill in for me for three months.  While I was still in contact with him,  it was such a change to be able to know that my business was being maintained and dealt with in my absence - something I'd never experienced before.

It was an amazing and restorative time for me - I climbed some mountains, on foot and by bicycle, I played a bunch of Ultimate Frisbee, hung with friends  and generally had a blast.  But I'm back at work full steam now, fully energized and even more grateful for all that I have in my life and work.

So that break accounts for the *recent* lack of blog posts... but what about before that? I'll have to confess to general lame-itude there... That's the aforementioned reference to not practicing what I preach.... hey even I'm imune to good guidance from time to time!

What I so often discuss is the need for artists to create and maintain an ongoing relationship with their fans - and one of the tools to do so is regular new content on a webiste... you know, that thing that has been lacking from this site for a while!  And for me, it's even more important, cause I don't have gigs to play or new music to pitch etc...  This is where I get to add one of the greatest phrases in the English language, 'do do as I say, not as I have done', 'k?

But there's a bunch of new stuff in the chute and on its way....

Collisions at the Corner of Art and Commerce